A Conversation with President Barack Obama

As a Premium Member of the Greater Vancouver Board of Trade, Boyden is proud to attend this exclusive event. 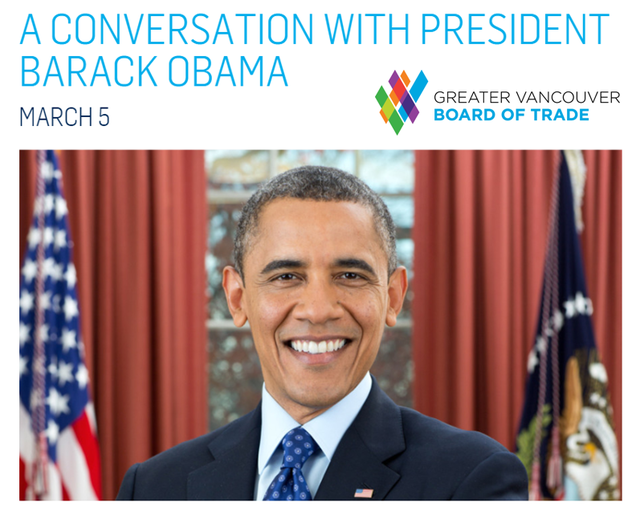 On Tuesday, March 5, 2019 the Greater Vancouver Board of Trade will be hosting an exclusive event, A Conversation with President Barack Obama.

Boyden, a global leader in executive search, proudly serves Canadian organizations and institutions. As a Premium Member of the Greater Vancouver Board of Trade, we are committed to excellence in leadership and proud to support opportunities for these essential discussions.

Learn more about this event by visiting the Greater Vancouver Board of Trade website.

Barack Obama is the 44th President of the United States.

Few presidents have walked a more improbable path to the White House.  Born in Hawaii to a mother from Kansas and a father from Kenya, Obama was raised with help from his grandparents, whose generosity of spirit reflected their Midwestern roots.  The homespun values they instilled in him, paired with his innate sense of optimism, compelled Obama to devote his life to giving every child, regardless of his or her background, the same chance America gave him.

After working his way through college with the help of scholarships and student loans, Obama moved to Chicago, where he worked with a group of churches to help rebuild communities devastated by the closure of local steel plants.  That experience honed his belief in the power of uniting ordinary people around a politics of purpose, in the hard work of citizenship, to bring about positive change.  In law school, he became the first African-American president of the Harvard Law Review, then he returned to Illinois to teach constitutional law at the University of Chicago and begin a career in public service, winning seats in the Illinois State Senate and the United States Senate.

On November 4, 2008, Barack Obama was elected the 44th President of the United States, winning more votes than any candidate in history.  He took office at a moment of crisis unlike any America had seen in decades – a nation at war, a planet in peril, the American Dream itself threatened by the worst economic calamity since the Great Depression.  And yet, despite all manner of political obstruction, Obama's leadership helped rescue the economy, revitalize the American auto industry, reform the health care system to cover another twenty million Americans, and put the country on a firm course to a clean energy future – all while overseeing the longest stretch of job creation in American history.  On the world stage, Obama's belief in America's indispensable leadership and strong, principled diplomacy helped wind down the wars in Iraq and Afghanistan, decimate al Qaeda and eliminate the world's most wanted terrorists, shut down Iran's nuclear weapons program, open up a new chapter with the people of Cuba, and unite humanity in coordinated action to combat a changing climate.

In times of great challenge and change, President Obama's leadership ushered in a stronger economy, a more equal society, a nation more secure at home and more respected around the world.  The Obama years were ones in which more people not only began to see themselves in the changing face of America, but to see America the way he always has – as the only place on Earth where so many of our stories could even be possible.

Barack Obama and his wife, Michelle, are the proud parents of two daughters – Malia, 18, and Sasha, 15.

Unintended Consequence
Impact of AI on our Future Workforce

Join us Nov 22 to celebrate the very best of business in Ottawa.

Re-Thinking Talent in the Capital

The most forward-thinking business event in the world.

Senior Women Academic Administrators of Canada (SWAAC) was founded in 1987 to provide a forum and a collective voice for those who identify as women in senior administrative ranks in Canadian universities, colleges, and technical institutes.

As annual partners, Boyden is a proud supporter of 2019's Toronto Gala.

A Council of Chairs of Ontario Universities Event

With Events Across Toronto and Montreal

Join us Nov 16 to celebrate the very best of business in Ottawa.

Business in Vancouver, Deloitte and TEC Canada present the BC CEO Awards.

"Agents of Change: Boards That Are Leading on Gender Diversity"

As annual partners, Boyden is a proud supporter of 2018's Gala

As Annual Partners of Economic Club of Canada, Boyden is proud to attend this exclusive event.

Join us Nov 15 to celebrate the very best of business in Ottawa.

Join us Oct 12th to support Sport in Calgary

Unleashing the Power of Play

ACCES is a leader in connecting employers with qualified employees from diverse backgrounds.

Join us on Oct 24. Presented by Boyden and RBC - Rising Leaders Series: Making Your Own Human Capital

“Strengthening the Innovation Ecosystem”. This year, the Summit will focus on the ways in which the public and private sectors can coordinate their efforts to create a best in class innovation ecosystem that leverages Ontario’s assets and stimulates new investments to increase productivity and drive growth.

Event
Across Canada, Boyden will wear Plaid for Dad in support of Prostate Cancer Canada

The Top 100 Awards celebrates the professional achievements of strong female leaders across the country in the private, public, and not-for-profit sectors. As a proud Women’s Executive Network Corporate Gold Member, we are pleased to share the news that nominations for 2016 WXN Canada’s Most Power Women are open.

WXN wants to continue the dialogue around diversity that has really started to pick-up since the Ontario Securities Council (OSC) published the much-anticipated Final Rules for “comply or explain” disclosure requirements for boards, in the fall of 2014. Leading up to the release of the Canadian Board Diversity Council Annual Report Card in November 2015, this breakfast will feature The Right Honourable Paul Martin.

On November 26th, Boyden will be joining Women’s Executive Network (WXN) at their annual Canada's Most Powerful Women Top 100 Gala, shining a spotlight on remarkable Canadian women who are inspiring the next generation of female leaders.

Siemens has stood for innovation, quality, reliability and internationality, and continues to stand at the forefront of Canadian innovation as one of its top engineering firms. Join us at the C.D. Howe Institute for this essential discussion with CEO Robert Hardt.

The C.D. Howe Institute is an independent not-for-profit research institute whose mission is to raise living standards by fostering economically sound public policies. It is Canada’s trusted source of essential policy intelligence, distinguished by research that is nonpartisan, evidence-based and subject to definitive expert review. It is considered by many to be Canada’s most influential think tank.