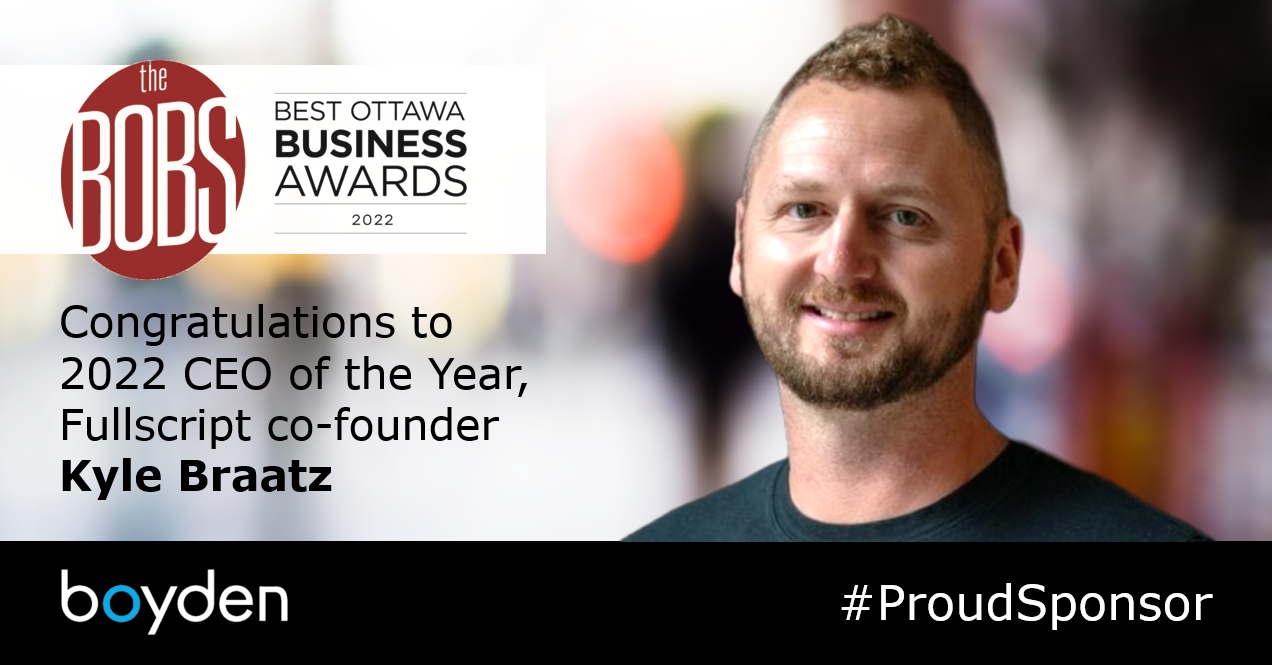 “(Braatz) is quite unique from his predecessors,” said Eric Lathrop, managing partner at Boyden, which specializes in executive recruitment in Ottawa. “Having a recipient under the age of 40 really illustrates that next-generation leaders are stepping up in Ottawa’s technology sector to continue its growth and evolution.”

By his own admission, it took Kyle Braatz a while to figure out his true purpose in life.

But once the 38-year-old native of London, Ont., found his calling as an entrepreneur dedicated to doing good for others, there has been no stopping him.

Over the past 11 years, the co-founder and chief executive of Ottawa-based online health-care firm Fullscript has taken the company from an idea he and business partners Brad Dyment and Chris Wise hashed out in his living room to a multinational enterprise that provides nutritional supplements and other natural health-care products as well as treatment plans to more than five million patients.

After a momentous 12-month stretch that saw Fullscript raise US$240 million in equity financing – the biggest such funding haul in the nation’s capital since the dot-com boom in the early 2000s – and acquire one of its biggest competitors, Braatz is being honoured as the city’s 2022 CEO of the Year by OBJ and the Ottawa Board of Trade.

The University of Ottawa alumnus is the 23rd recipient of the award, joining a prestigious group of past winners that includes Minto Group’s Roger Greenberg, Shopify co-founder Tobi Lütke and Kinaxis CEO John Sicard.

Among the most prominent members of the new generation of tech entrepreneurs who are leading the capital’s growing crop of up-and-coming software firms, Braatz is just the second CEO of the Year to be born in the 1980s, after Lütke.

“(Braatz) is quite unique from his predecessors,” said Eric Lathrop, managing partner at Boyden, which specializes in executive recruitment in Ottawa. “Having a recipient under the age of 40 really illustrates that next-generation leaders are stepping up in Ottawa’s technology sector to continue its growth and evolution.”

The honour comes just as Fullscript is taking a giant leap forward as a result of what Braatz called a “transformational deal” earlier this year – its acquisition of New Hampshire-based competitor Emerson Ecologics.

The mammoth transaction doubled the Ottawa company’s size virtually overnight. Fullscript now employs more than 900 people at offices in Canada and the U.S., while its 2022 revenues are projected to be north of $600 million as it expands its platform across North America.

For Braatz, who once thought he’d follow in his father’s footsteps and pursue a career as a firefighter, the timing of the award is fortuitous.

“This has been a transition from entrepreneur to entrepreneurial CEO, which is a much different role,” he said Wednesday of his evolution at the helm of an organization that’s fast heading toward $1 billion in annual revenues.

“So to be recognized with this, it’s definitely something I’m really grateful for and proud of.”

It’s also the latest landmark in a long journey of personal growth for Braatz, who was inspired to enter the world of social entrepreneurship after his grandfather, Frank Moores, was diagnosed with liver cancer while he was in university.

Fifteen years later, that drive to do good for others continues to propel Braatz and his company to greatness.

“I think that we can be the next big business, not only in Canada, but across North America and further and seen … in that public light of a company that’s emulated like a Google or an Amazon or a Shopify,” he said.

“I’ve probably never been more excited about what we’re building than I am today. My goal right now is just to do everything I can to do what’s best for this company and the people that work here and build something great.”

The CEO of the Year award is part of the Best Ottawa Business Awards – better known as the BOBs – which are presented annually each fall.

Braatz and other notable local business leaders – including the Lifetime Achievement Award recipient and the CFO of the Year – will receive their awards in a gala at the Westin Ottawa on Thursday, Nov. 24. Tickets will be available later this month.

“We’re really excited to celebrate Kyle’s success and the success of the entire Fullscript team,” said OBJ publisher Michael Curran. “To think that Ottawa has produced a technology sector leader of Kyle’s calibre bodes well for the future.”

Dans les médias
Board Diversity: A Path to Board Service from the Wisdom of Black Women Directors