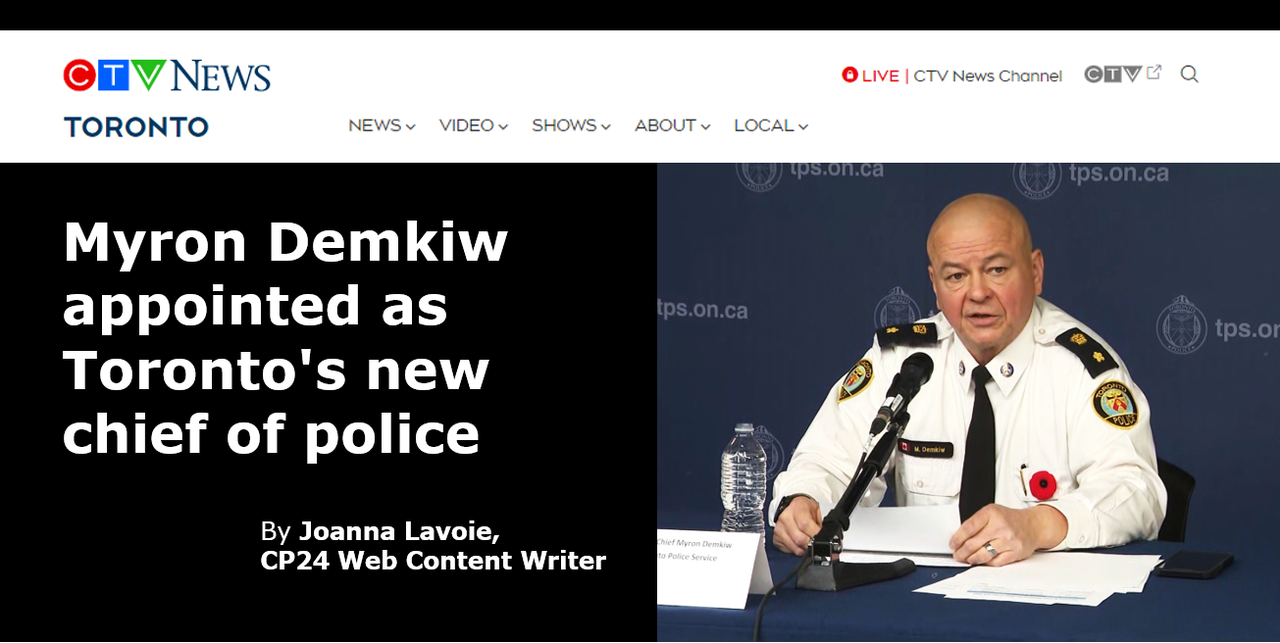 Toronto will soon have a new chief of police.

Today, the Toronto Police Board announced Myron Demkiw, a 32-year veteran of the force, will serve as the city’s next police chief.

Police Chief James Ramer, whose contract runs until the end this year, will continue to helm Toronto police until Demkiw begins his new role. Ramer has served as Toronto’s police chief since the resignation of former police chief Mark Saunders in August 2020. He also held the role of Deputy Chief of Specialized Operations Command prior to becoming chief.

The long-time Toronto police officer posted a tweet in support of Demkiw's appointment.

In a release, the TPS Board called Chief Designate Demkiw a "national police leader, who has dedicated his career to enhancing public safety in partnership with Toronto’s diverse communities, including preventing and effectively combatting gun and gang violence, while supporting the police service’s ongoing reform and modernization agenda.”

Board Chair Jim Hart said Demkiw “meets the call put out by Torontonians who seek a police leader that possesses extensive operational policing experience to keep our city, its residents, and its visitors safe, while applying a modern vision of community safety that is progressive and community-centred.”

He said Demkiw is also a “dedicated public servant and relationship-builder, committed to building and enhancing trust with the diverse communities we serve.”

Hart said the TPS Board was “impressed” with Demkiw’s “wealth of international policing expertise,” notably in the gun and gang violence and counterterrorism as well as his “commitment to continued reform and modernization of Canada’s largest municipal police service.”

Mayor John Tory, who is also a TPS Board member, congratulated Demkiw, whom he called a “respected policing expert” when it comes to “community safety and well-being, as well as gun and gang violence prevention and intervention."

“I know he will bring a focus on confronting gun and gang violence to his new role, along with a determined commitment to keeping our city as one of the safest major cities in the world," he said in a statement.

"I also know that Chief Designate Demkiw will continue the work underway on police reform. This is so important – the work to build and rebuild trust cannot stop. We must continue to reform and modernize our police service, and we must ensure that every resident across our city feels respected and protected."

A member of the Order of Merit of the Police Forces, Demkiw will assume the role of Chief of Police on Dec. 19 after a three-month transition period. He is set to hold a press conference on his first official day to outline his priorities for his three-year term.

Demkiw said he’s “honoured” to be the city’s next chief of police and is “deeply invested in the city of Toronto and its people.”

“I am committed to the integrity and success of the Toronto Police Service,” he said in the release.

“I will spend the next 95 days in transition and supporting Chief Ramer before I assume command on December 19, 2022. I look forward to engaging with our Members, the public, and the media when I begin the role of Chief of Police later this year.”

This news comes just days after TPS tragically lost one of its long-time members, Const. Andrew Hong, in a shooting rampage.

“The Board recognizes that this is an extremely difficult and sensitive period for our Members and their families, as they grapple with the recent tragic loss of PC Andrew Hong, with the immense grief, sorrow and pain that it brings. This is an organization, and, indeed, a city in mourning, and we make this announcement in somber acknowledgement of this important fact,” they said.

“However, given that this formal decision has now made by the Board, and its clear and direct impact on both the Members of this Service, and the members of Toronto’s communities, we make this announcement today, to share a matter of significant organizational and public interest.”

Demkiw also acknowledged that this news comes at a time when the TPS is mourning the loss of one of their own.

SELECTION OF THE NEW CHIEF

Demkiw was chosen following a two-part selection process that included a public consultation that “guided the Board in identifying the competencies, skills and attributes in selecting the next Chief of Police."

For the first time ever, the civilian body also included individuals who are not members or staff in the search advisory committee.

Dans les médias
Forbes: The Role of Board Service in a Meaningful Post-Career
This website uses cookies to ensure you get the best experience on our website. Learn more