This Transgender CEO Has a Hiring Lesson for All Business Leaders. It Upends What We Know About Diversity and Inclusion

As the CEO of Sweden's ICA Insurance and an accomplished international businessman, Carl Farberger was high profile. But that didn't stop him from telling his team in September of 2018 that he would no longer be known as Carl. From that point on, he would be Caroline Farberger -- the first openly transgender CEO in Sweden. 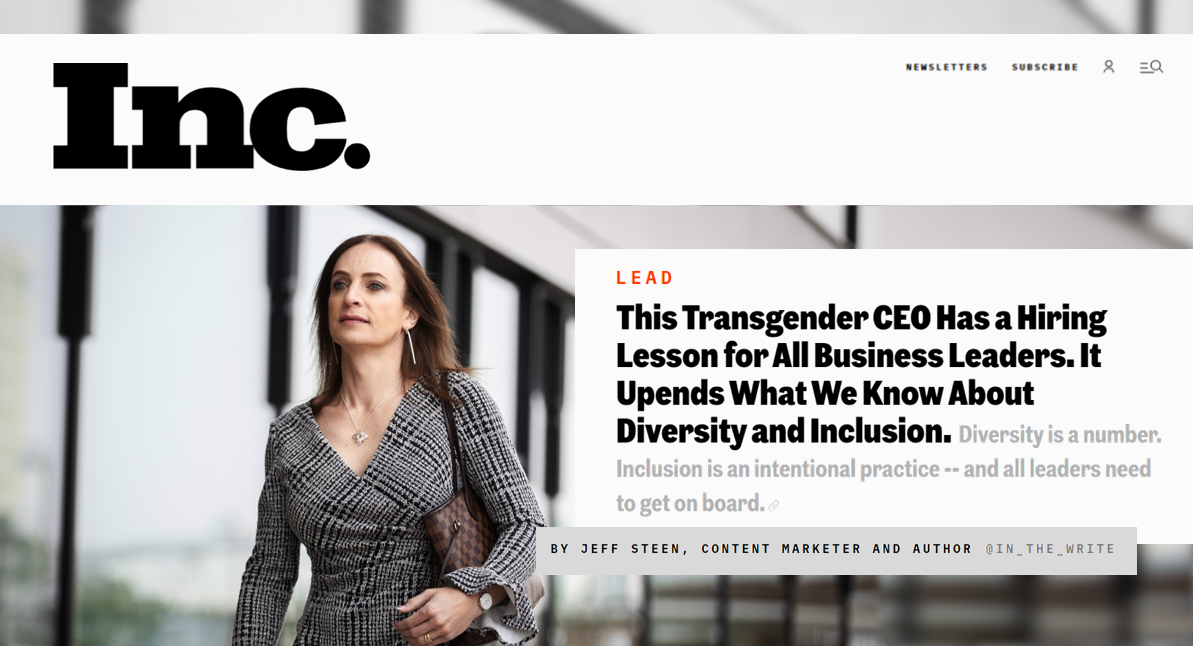 Since that day, Farberger has received significant praise from Swedish and international groups and media, noting her contributions to the LGBTQ community. In fact, she was named LGBTQ Person of Year in Sweden in 2019.

Farberger's contributions to business extend far beyond her glass ceiling shattering, however -- powerful though that is.

In a recent interview with DEI firm Boyden, Farberger talked candid about her journey and experience as an openly transgender CEO. Most impactful in the transcript is this piercing quote about what we still don't quite get about the differences between diversity and inclusion:

Those two words are usually put together, but they are indeed different. It's easy to target diversity as such. Meaning, essentially, that you make sure that you can provide good statistics in having employees on your roster. That's the easy part.

The more difficult and more important parts are the inclusion pieces. Inclusion means that you are able to harness the benefits of having a diverse workforce. This means letting people come to the table and then listening to them, letting them influence decisions, and not just employing them. That is more difficult, because it requires people longing for the norm, typically white, middle-aged males, to change their behaviors and start listening to others.

DEI is at a cross-roads -- now just in the United States, but across the world. Pressure has been mounting on CEOs to pay more attention to this, but it's now no longer a firm nudge. As The Washington Post reported last year, Millennials and Gen Z professionals think of DEI as a requirement, not a "nice to have." The problem: Many business still don't know what it means.

Claiming DEI as a prioritized value is not just about going by the numbers or putting "Equal Opportunity Employer (EOE)" on your website. It's cultivating conversation, leaving space for tough discussions about disparities in the workforce, keeping an open mind, and being willing to take action that supports an employee-first ethos -- regardless of their race, gender, ethnicity, creed, sexual orientation, or background.

This begins, well, at the beginning -- with small startups and early-stage businesses still defining themselves. It begins with CEOs who can step up to a podium with commitment and humility and say, "I know DEI is important, but I'm not sure how to get there. I want to get there. Help me figure it out."

Fortunately, there are lots of tools at your disposal. The Association for Talent Development has many public resources on building a foundational DEI strategy, while universities (like the University of Michigan) are increasingly offering trainings and certifications designed to help leaders build truly inclusive workplaces -- not just check the diversity box.

I think most important, however, is mindset. Sit for a moment with Farberger's assertion that inclusion is different than diversity. Then, lean into an appreciation of an array of voices. And perhaps most critically, learn to listen when our instinct is often to talk.