April 28, 2021 - Today, we proudly announce Ericsson's President and CEO, Börje Ekholm, as the recipient of the Change Leader of the Year Award - Large Companies, recognizing his successful leadership of staff and operations, despite the pandemic's major challenges. 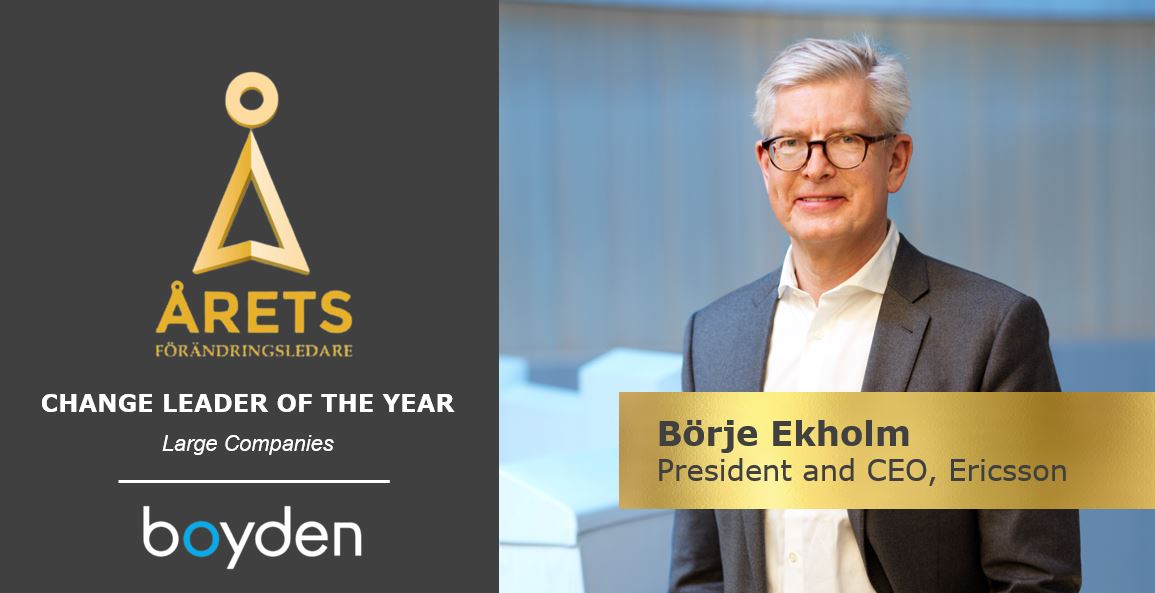 The Awards Jury shares their motivation for this year's celebrated recipient, Börje Ekholm:

"During the year, Börje Ekholm has shown exceptional ability to lead his organization during a period of significant external influence. He has set an example in rapidly and efficiently transforming the business and enabling teleworking for 100,000 employees spread across 180 countries. Under Börje's leadership, Ericson has had a positive share development and loss has turned to profit and the ambitious investment in the 5G network ensures continued growth. He is described as a down-to-earth rock star who is accessible to everyone, with a straightforward image and as a confident leader in both success and adversity."

Successful change management is among the most demanding in the business world. Boyden Executive Search and Interim Search, presenters of the awards, are especially honored to celebrate transformational leaders who drive their organizations forward with ambition and vision –  precisely in challenging and disruptive times. Katarina Brixéus and Elise Andström, Managing Partners, Boyden Sweden, and members of the jury, comment, "Recognizing inventive and inspiring leadership is our privilege as we congratulate Börje Ekholm. Reflecting on the past year, Börje is an inspiring example of foresight, courage, and determination to see his organization succeed in a most unprecedented time. Congratulations to Börje and Ericsson on this recognition."

Read our interview with Change Leader of the Year, Börje Ekholm

The jury analyzes the candidates from three perspectives:

Americas board director elevated to Chair, as three new board members are elected