CEO vacancies could spell opportunity for would-be executives in 2022

Roger T. Duguay has placed hundreds of executives in major companies.
He shares some of his favorite questions and the answers he’s looking for on job interviews. 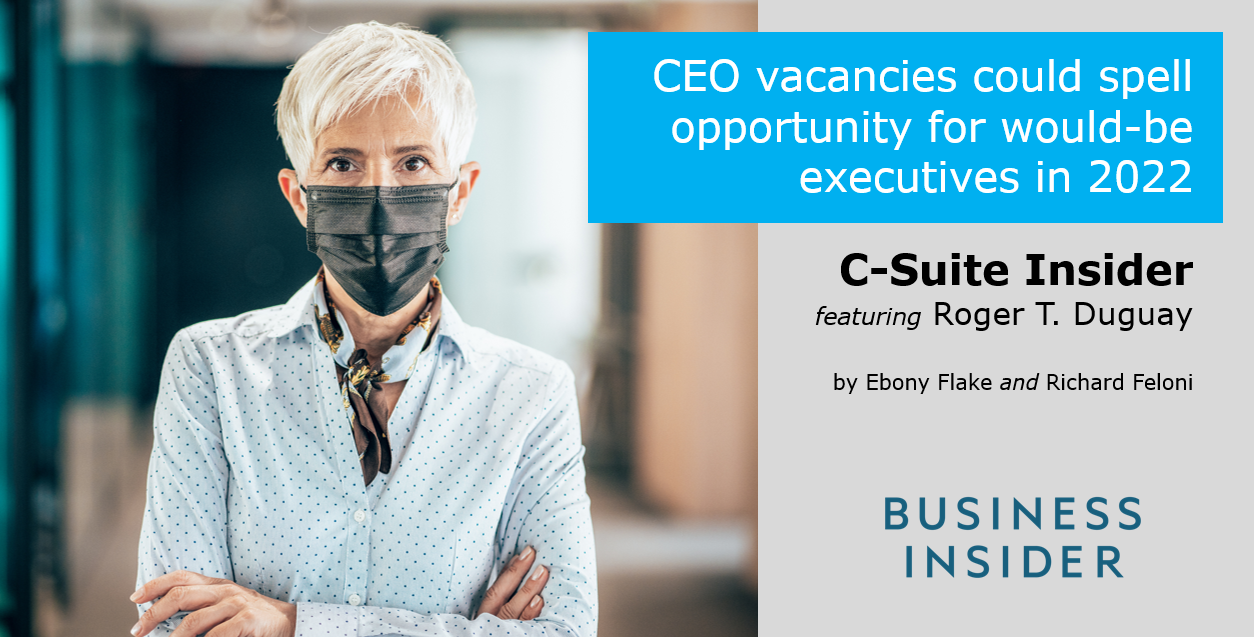 » The Great Resignation has cleared some runway to the C-Suite across many top organizations.
» Roger Duguay, a managing partner at top executive-search firm Boyden, shares tips on how to land an executive-level role.
» Duguay uses job interviews to find candidates who are self-assured without being cocky.

More than 38 million workers quit their jobs in 2021, offering more evidence of a movement some are calling The Great Resignation, during which employees voluntarily resigned their positions en masse following the COVID-19 pandemic.

While the wave of quitting is primarily driven by mid-level employees, C-suite executives also left their posts in 2021. According to a study from recruiting firm Heidrick & Struggles, CEO turnover spiked in the first half of the year, with 1,095 companies appointing a record of 103 leaders.

There is, of course, work to be done within top companies to solve the underlying issues contributing to the mass exodus of valued employees and top executives. However, the increase of vacancies could spell opportunity for aspiring captains of industry as the oft-congested runway to the C-suite has been cleared across many top organizations.

As managing partner at Boyden, one of the world's top executive-search firms, Roger Duguay has interviewed countless execs — and even more aspiring ones. His strategies for finding top talent has proven so successful that Boyden's CEO appointed him leader of the firm's global CEO- and board-services practice.

Duguay's approach to interviews, for example, is not traditional. He doesn't ask about qualifications or experience — he asks questions that probe into the psyche.

"To me, the fact that you've done a good job in the last five, 10 years is not a guarantee anymore that you will be the good candidate two years from now," Duguay told Insider. Because business across all industries changes so rapidly, he said, he instead looks for signals that the candidate is adaptable and curious.

During his time at Boyden, Duguay has placed more than 100 people into executive, CEO, or board roles in both the private and the public sector. (He estimated he'd gone through 1,000 candidates.) When he's looking for a CEO, he'll give a two-hour interview with his top candidates. He shared some of his favorite questions from those deep conversations.

And while Duguay uses them to find a new head of a company, they are just as valuable for any experienced hire.

'Tell me about your personal life.'

Duguay doesn't necessarily ask this one so directly, but he's getting at what they're like outside the office. This includes things like how they spend their weekends and what they're reading.

"I'm going to ask a lot more questions that are going to tell me about the human being behind the role," he said. "Not what you've done and what university you've been to."

When Duguay is interviewing someone, skills required for the job in question are a prerequisite for even being in the room. So he uses prompts to get at what kind of person the candidate is.

"It's important to learn how the person thinks in terms of career and not just job," said Phil Friedman, CEO at CGS. "I want to hear if the applicant can align their thinking with my company. They should have a natural ability to align the response to the business."

'If you had to do it all over again, is there anything in the last 5 years you would do differently?'

"If you're not able to tell me five to 10 big mistakes you've done in the last five years, something's really wrong with you," Duguay said.

He likes to refer to these mistakes as "scars." He's not, of course, expecting a candidate to give an explanation that portrays them as a terrible fit for the job. Instead, he wants to see that a prospective leader is transparent about their mistakes and has drawn lessons from them.

A new year will undoubtedly call for different leadership skills for business leaders. Even though the role of CEO requires confidence, it also requires someone who is humble enough to work with a board and delegate responsibilities to deputies, Duguay said.

When he got a chance to ask one of his personal heroes, the Buddhist monk and Dalai Lama associate Matthieu Ricard, this question, Ricard responded with, "Oh, maybe a 4 out of 10." This was just further proof that a job candidate who smiled and gave "9" as an answer was not someone he should be taking seriously.

'Tell me the exact reason why I should not hire you for the role.'

Duguay saves this one for the end, and he said it often stops a candidate cold.

"Now I can see in their eyes, 'Oh, do I tell him the truth because maybe he doesn't know this? Those two flaws — and I really know they are my flaws — am I going to tell him? He's going to add them to this count of flaws ... Or do I just play that answer?'"

He's clearly not looking for an answer of the "my biggest flaw is that I work too hard" variety — and about half the people he interviews give something along those lines.

Duguay wants to find someone who is self-assured to a degree where they can open themselves for a moment of vulnerability, rather than make the whole two-hour interview a demonstration of bravado. He wants to find someone comfortable with who they are, and if that personality also fits with what the company needs, then they'll end up with the job.

"I think the key in this life is to be the same human beings you are with your partners in life with who you are at work. Otherwise, you're not authentic, you're trying to play a game to please your colleagues," Duguay said.

"So those are the questions I love to ask, and very few people answer them properly. People don't know themselves."

This is an updated version of an article that was originally published on February 14, 2020.

Boyden is pleased to share the appointment news of Johanne Gauthier, a recruitment led by Sébastien Zuchowski

In conversation with R "Ray" Wang and Vala Afshar, Patrick explores the shifts within the role of the CIO and the value digital experts are creating.