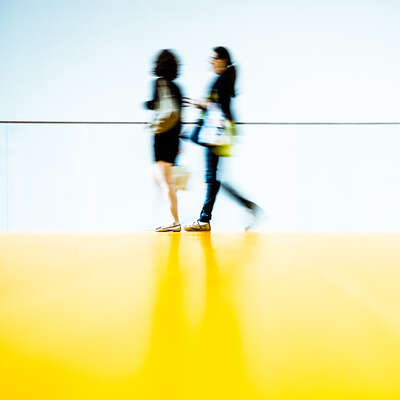 The retail apocalypse is paying off for at least one group: women in the C-suite.

While the crop of chief executives at the biggest U.S. companies gets more male, women have made some notable gains in retail. Just last month, Genesco, which owns the Journeys shoe brand, named its first female CEO, Mimi E. Vaughn, who was previously the chief operating officer and will take over in February.

Now, retail has the highest representation of women in the top job among large sectors in the Russell 3000: About 7% of retail CEOs are women versus about 5% in the broader index.

Women are reaching the top in part because of turmoil in the industry that's sparked a brutal turnover rate for executives. It's opening the door for an unusually strong pipeline of female candidates who have been rising through the ranks for years.

"With the churn from this year and probably the best-ever pool of talented women ever waiting to get drafted up to C-suite," said Douglas Ehrenkranz, managing partner at Boyden Executive Search, "maybe this is one of these years where there's a significant change in women's representation at the C-level."

Molly Langenstein, one of five women in the eight-person top management team at Chico's FAS Inc., said she has "always been able to look up in a company and have representation of women."

Throughout her career at the department-store chains Burdines, now defunct, and Macy's, she said she was surrounded by mentors and leaders — both men and women — who helped her rise into the executive ranks. She now runs the apparel division at Chico's as a president and reports directly to CEO Bonnie Brooks.

Women like Vaughn increasingly make up the top ranks in retail. In 2018, women held 16% of the most senior roles at the biggest consumer companies — a 17% increase since 2014, according to annual filings analyzed by Bloomberg.

The pipeline for female talent starts young. Folding clothes at the mall is a popular first job for high school and college students. In 2018, 1.2 million U.S. teenagers were working in sales and related jobs, according to Pew Research Center.

Langenstein started her career in eighth grade working in her mother's store. Once women are there, say Langenstein and retail analysts, they have a competitive advantage because they can relate to retail's main customers: women.

"To some degree, I think boards like the idea that companies are being run by the customer that they're targeting," said Christa Hart, senior managing director in the retail and consumer practice at FTI Consulting.

Because of retail's woes, some from this growing bench of female candidates are getting the opportunity to run things sooner than they would elsewhere. The consumer sector has pushed out 50 chief executives this year, more than any other industry, according to an Exechange analysis of executive departures.

And as companies struggle to keep up with rapidly changing consumer habits, the same force that creates opportunities for women also puts them at risk.

Also in November, Daniella Vitale resigned as CEO of Barneys New York after losing a battle to save the luxury retailer, a private company that filed for bankruptcy in August. She quickly moved into a new role at the much larger public company Tiffany & Co., rejoining the roster of CEO candidates. 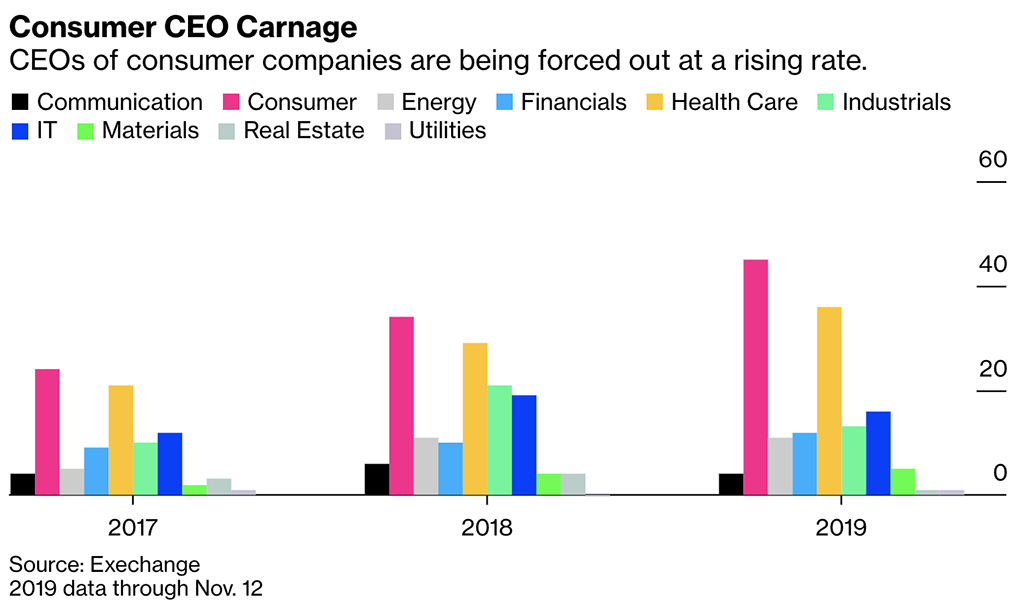 The recent departures of female executives may in part be a symptom of what's known as the "glass cliff," a pattern in which women are appointed to a leadership position just as an organization is facing challenges.

It's certainly a tough time for retailers. Many shoppers have abandoned the mall in favor of online and mobile shopping. This year brought a record number of store closures — more than 7,600, according to a Credit Suisse report. Rumblings of a possible recession in the year ahead and the ongoing U.S.-China trade war create the type of uncertainty no retailer wants. At the same time, investors and company boards are demanding better results.

"Those are challenging situations regardless, for a man or woman," said Ehrenkranz, of the executive search firm. But so far, female CEOs in retail have not been forced out — or pushed off the cliff — any faster than their male counterparts, according to Exechange.

Langenstein, who started at Chico's in August, sees the volatility as opportunity.

"The churn at the top taught me to be more focused," she said. "In my career, I've always sought out the job that is a little bit messy and needed fixing. There is something appealing about those roles that you can go in and turn it around." 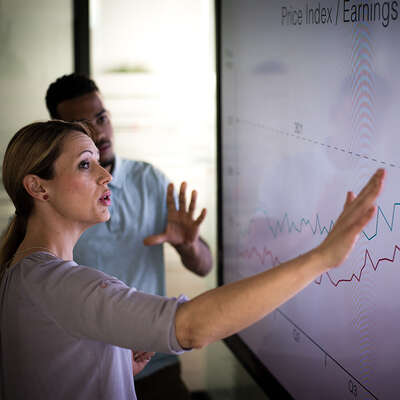