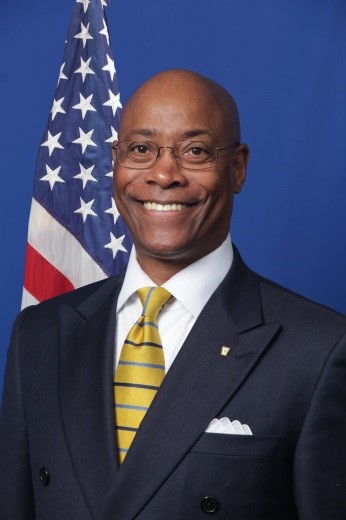 This article was originally published by Independent-Messenger magazine. Click here to view the original article.

Governor Ralph Northam announced Thursday the selection of Major General Roosevelt “Ted” Mercer, Jr., United States Air Force (Retired) as the new Chief Executive Officer and Executive Director of the Virginia Commercial Space Flight Authority (Virginia Space). General Mercer was appointed by the Virginia Space Board of Directors this morning and will assume the role on August 1, 2021 upon the retirement of Dale Nash, who has led Virginia Space since 2012.

“Major General Mercer has extensive experience in space with the United States Air Force and in industry, and his proven ability to bring partners to the table to work toward a shared goal will greatly benefit both Virginia Space and the Commonwealth,” said Governor Northam. “Under his leadership, Virginia is poised to maximize the investments we have made in our world-class spaceport and launch into the future as a leader in space exploration, research, and commerce.”

General Mercer brings decades of experience in the aerospace field and executive leadership in both the military and private sectors. In 2016, Mercer was named Director of the Interagency Planning Office for the “NextGen” program at the Federal Aviation Administration (FAA). He later served as Director of the NextGen Collaboration and Messaging Office, where he ensured collaboration and coordination with partner agencies and other countries. Previously, he served 32 years with the United States Air Force, where his duties ranged from commanding the 30th Space Wing to commanding a space lift logistics group, developing national security policy, and serving as Deputy Director of Operations for the Air Force Space Command Headquarters at Peterson Air Force Base in Colorado Springs, Colorado.

“Building on the accomplishments of Dale Nash, I believe General Ted Mercer will be a transformational leader for Virginia Space,” said Secretary of Transportation Shannon Valentine. “By bringing together government, private sector, and military experience, General Mercer is prepared to position Virginia Space as the leader in reliable, resilient and agile access to space.”

General Mercer will assume leadership of Virginia Space, following more than a decade of investments in the Mid-Atlantic Regional Spaceport that help provide responsive launch services for both commercial and government entities. Through a reimbursable Space Act agreement with NASA and operating under an FAA launch site license, Virginia Space contracts with NASA WFF for range and mission safety management, telemetry, and other complimentary services.

“I am honored to have this opportunity to once again lead one of only four spaceports in the nation that launches to orbit,” said Roosevelt “Ted” Mercer Jr., Major General, United States Air Force, Retired. “I am extremely excited to join the Virginia Space team and build on the legacy established by Dale Nash. The spaceport is already well-positioned for growth, and my objective is to leverage existing and future planned assets to take operational tempo to the next level. This will benefit existing spaceport customers, attract new business, and create jobs and economic investment in Virginia. I look forward to continuing the spaceport’s progress as a multi-purpose, multi-user facility.”

During his tenure, Dale Nash has led Virginia Space to several major accomplishments including the successful completion and rebuild of Pad-0A, the homeport of the Northrop Grumman Antares rocket; significant upgrades to Pad-0B, which is currently launching the Northrop Grumman Minotaur family of rockets; completion of a purpose-built, 3,000 foot long Unmanned Aircraft Systems airfield and Vertical Take-Off and Landing pad; construction and activation of a new Payload Processing Facility for classified and scientific missions; completion and activation of Launch Complex 2, the U.S.-based launch site for the Rocket Lab Electron rocket; and construction of an Integration and Control Facility for Rocket Lab located in Wallops Research Park.

Under Virginia law, responsibility for the selection of the Virginia Space CEO and executive director is vested in the Board of Directors. The national search process was overseen by a committee of five current members of the Virginia Space Board of Directors and facilitated by the executive search firm Boyden, which had initial discussions with more than two dozen potential candidates. The firm interviewed and conducted background checks on more than a dozen candidates and the search committee interviewed six outstanding candidates. The committee, followed by the full board, unanimously approved the selection of General Mercer to lead this critical organization.

“This is the fourth executive search that I have led, and it was the most extensive and exhaustive,” said Major General Edward Bolton, Jr., United States Air Force, Retired. “I am confident that the board has selected the best possible candidate to take the helm of Virginia Space and lead this business as we work to become an increasingly competitive space launch provider over the next decade.”

“I am deeply grateful to Governor Northam and Secretary Valentine for their strong support for the Virginia Commercial Space Flight Authority,” said Jeff Bingham, Chairman of the Virginia Commercial Space Flight Authority. “I could not be more pleased with the result of the exhaustive search effort guided by Ed Bolton that led us to Ted Mercer, and his agreement to take the reins of executive leadership for Virginia Space. We have an exciting future ahead for Virginia Space and Ted is supremely qualified to help us realize the full potential of that future.”

In the Media
The Hybrid Workforce Post-COVID

The AESC’s latest article on trends in the workplace