The Hottest Corporate Board Seats in America Right Now

This article was originally published on Bloomberg.com. Click here to view the original article.

If money talks, Starbucks Corp. CEO Kevin Johnson is about to get an earful.

When the coffee chain’s expanded board meets for the first time later this year with new members from Apple Inc., Nike Inc. and Domino’s Pizza Inc., the 13 executives around the table will represent public companies with $440 billion in combined revenue. Walt Disney Co. is the only other U.S. company with similar heft in the board room.

“If you’re at a high-rep, high-prestige company, you want to go on a similar board,” said David Larcker, a professor at the Stanford Graduate School of Business. “What that looks like changes over time.”

Fifty years ago, those prestigious board seats were at companies such as IBM or U.S. Steel Corp.. Executives crowded Jack Welch’s meeting rooms in the 1980s. In the 1990s there was Yahoo Inc., AOL, and other dot-coms. The Procter & Gamble Co. board was overflowing with CEOs well into this century.

Following the revelation of widespread fraud at Enron, once a hot board in its own right, the Sarbanes-Oxley Act placed greater oversight responsibility on corporate directors. Today, a working executive can only realistically serve on one or maybe two outside boards, Larcker said. 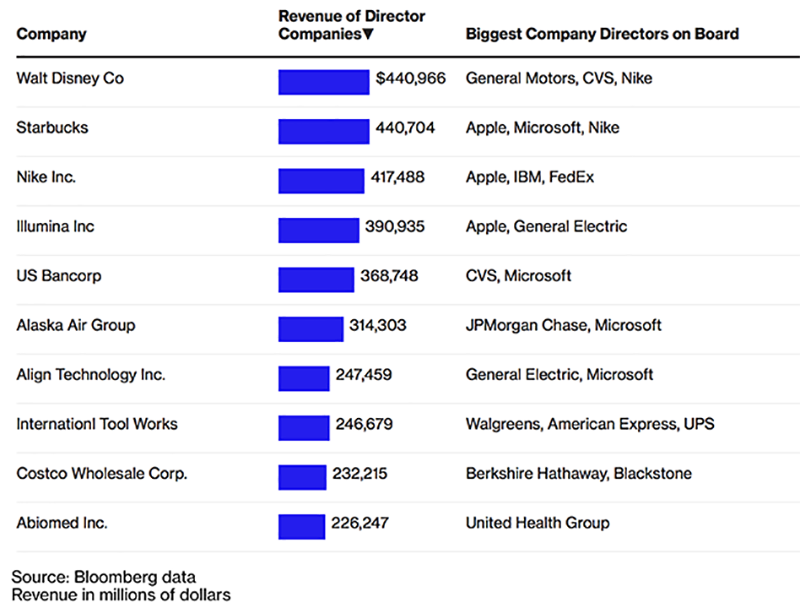 “A strong draw is, what can they learn from other directors?” said Jeffrey Sonnenfeld, senior associate dean for leadership studies at the Yale School of Management. “They want to find genuine peers that know something they don’t know. They are looking to learn new technology or skills.”

Starbucks has been a hotbed of new product ideas, and undertaken an ambitious plan to make its stores America’s “third place” -- a broadly welcoming community watering hole. Disney, with its Star Wars and Marvel empires, absorption of 21st Century Fox, and aggressive foray into streaming, is at the center of digital transformation. Nike’s global footprint is expanding, along with a savvy marketing machine known for a strategic embrace of controversy.

Both Disney and Starbucks have four high-powered CEOs of public companies on their board. Nike only has two, but one of them is Apple’s Tim Cook, who is also the lead director. About half of the S&P 500 companies don’t have even one sitting public company CEO among their outside directors, according to data compiled by Bloomberg.

“There’s a tier of candidates that kind of have their pick of companies out there,” said Jeff Hodge, a managing partner at executive recruiter Boyden, whose duties include helping top executives find board seats at other companies.

The top companies also pay more. Median pay for independent directors at an S&P 500 company is $284,950, according to ISS Analytics, the data intelligence arm of Institutional Shareholder Services. For smaller companies in the Russell 3000 index, those not included in the S&P 1500, it’s $143,077, or about half as much.

— With assistance by Leslie Patton