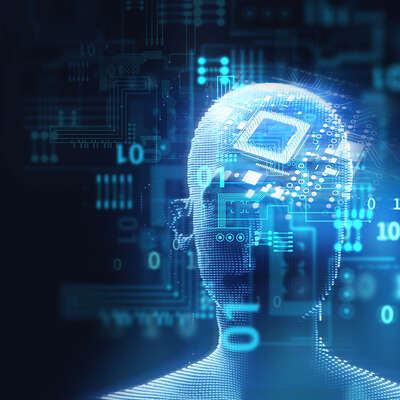 The Robots are Coming: Impact of AI on Executive Search

John Curtis-Oliver, Partner of Boyden UAE, presents an Artificially Intelligent perspective into the future of the executive search industry

The success or otherwise of executive hiring has long been a source of concern for boards. Tony Hsieh famously admitted that poor hiring decisions had cost Zappos over $100 million. The executive search industry is seen as a means of mitigating this risk, reassuring shareholders that there has been a credible process to reduce the risk of a bad hire. A sound research-based methodology means that boards and other executive decision makers can hire based on a reliable body of evidence and a thorough due diligence process. If the individual proves not to be successful, they can comfort themselves that they are off the hook as their only crime was to appoint a reputable executive search firm to drive the process.

I have been surveying technology industry leaders from around the world to get their sense as to the extent to which, at executive level, machines can replace humans at each phase of the executive hiring process, either now or within the next five years. HR professionals and executive search consultants were not included in the study as the priority was to learn from the technology experts and understand how they view the industry from the outside. Respondents were asked to comment on the executive hiring process rather than on executive search as an industry. 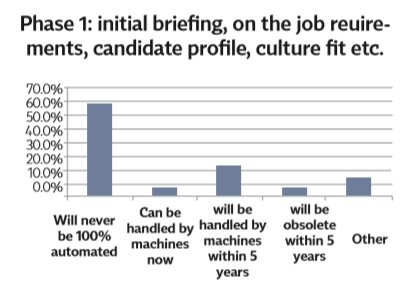 The consensus was that gaining initial understanding of the requirement, especially concerns like culture fit, would require a humanto-human interaction, albeit 38% did not wholly agree with that view. The majority of those who ticked other suggested that humans would always be part of this phase but that the human role would reduce over time as the machines become more advanced. While some questioned the ability of machines to assess culture or other softer factors related to the role, others pointed out that human bias can play a major part in distorting this phase of the process. If humans continue to define the scope of the requirement, AI’s potential to innovate is naturally limited to a supporting role. 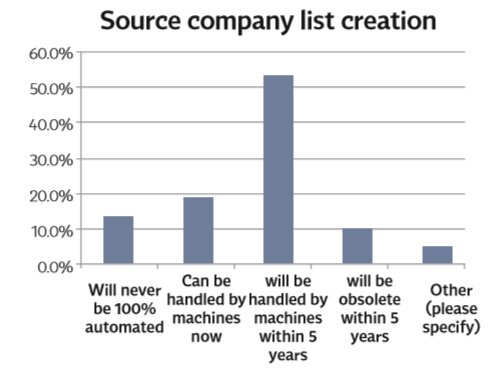 The source company analysis and long listing phases of the process were widely seen as those which could most easily see machines taking over, with only 13% believing that identifying the source companies will remain a human function, and 35% stating that long listing will remain a human process. In the past, there was no LinkedIn, no social media and generally very little publicly available information on executives. Companies hid their key people so that they would not be poached. My personal view is that one of the most significant triggers for improved HR practices around the world was the increased availability of data.  Companies realised that they could not hide their key employees anymore. If they have poor HR practices, it will become public knowledge. Smartly, companies began to use employees as advocates, openly encouraging them to raise their profile. Additionally, HR departments learned that key staff would be routinely approached about other jobs. To retain key staff, it needed to become genuinely preferable to stay than to leave. 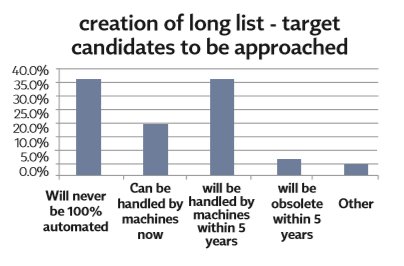 The idea of an executive search firm taking a number of weeks to conduct initial desk research is becoming more difficult to defend given the availability of data. The evidence suggests that we may be less than five years away from the initial baseline data gathered by the research teams becoming commoditised.

Ali Nawab, founder and CEO of AI firm kiwi. ai notes: "Executive placement is a tough game.  Cognitive, accomplished, ambitious executives have minds of their own. The search consultant needs to be a coach, friend, analyst, financial advisor and strategy consultant all in one. Deep learning (recently re-branded as AI) will absorb the majority of the administrative and support activities, leaving the best consultants to win based on their core capabilities."

The differentiator will be the capabilities of the consultants. There are numerous low cost methods for identifying an extended list of potential profiles. The true experts will need to show their worth by ensuring a sound decision making process, which differentiates between the good and the great.

Where do humans need to take the lead?

Approximately 80% of respondents believe that shortlisting, offer negotiation and onboarding would remain human processes. For clients and hiring companies, finding a candidate is easy. Finding and successfully onboarding the candidate is more challenging, and a decision that has regularly been the difference between success and failure. It is, in a way, easier when everything clicks into place, whereas having the courage to challenge the client and advise against a course of action is the true measure of a search consultant.

Human acceptance of machine intervention is key. If driverless cars or robot surgeons are found over time to be statistically safer than human drivers and surgeons, the minute one human dies in a driverless car or on the table of a robot surgeon, there would be a groundswell of opinion seeking for them to be banned. Deaths on the road or in hospitals are widely accepted as normal when the protagonists are all human. Equally, human error in hiring decisions is largely forgiven, whereas machine error would not be.

Interestingly, there was support for the idea of machines interviewing, albeit 62% saw this as a human process for the foreseeable future, noting that the data relates to executive hiring only. As with the surgeons and driverless cars, there is the sense that the human reaction to a machine-based mistake in a hiring process, even if the machine is statistically more accurate, might hinder the progress of AI interviews. If a person is hired based on an AI interview and fails in the job, the machine will be blamed. The human touch in managing the interview process is also a factor in making the executive feel valued. Early stage investor, Jeremy Foster of Astrolab advised: “I think we are ten years away from machines taking over the interview process. The AI system will need a lot of coaching before you could let it in the wild. Your average Joe might accept an AI interviewer, but would an executive accept that he/she wasn't worth a personal call? I doubt it based on the execs I've met”. This backs up again the suggestion that the machine being able to perform a task does not mean that it will be accepted by the humans involved. 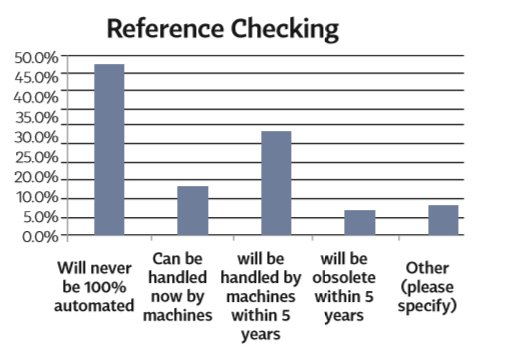 Elimination of human bias is a key driver behind the increased use of AI. If a candidate reminds us of someone we do not like, or we have an instinctive distrust of a certain segment of society, it is near impossible to completely eradicate this unconscious bias from our assessment process.

According to Jahanzaib "J" Ansari, Co-founder & CEO of artificially intelligent recruiting assistant company Knockri, “AI can pre-screen and create a short-list of the best fit applicants by measuring verbal and non-verbal communication skills which are scientifically correlated to success predictors. Since technology has advanced significantly, AI analyses a person's response based on context, as the machine is sentient. Many employers have begun to look at artificially intelligent recruiting tools that assess a candidate objectively rather than subjectively to ensure that no one is ever held back due to any conscious or unconscious hiring biases.”

The purpose of an interview and selection process is surely to predict the future behavior of the candidate to ensure a strong fit with the company’s objectives and culture. With Minority Report style predictive policing being trialed around the world, how long is it before such techniques are used regularly in an interview process? The challenge appears to be legal and moral rather than technical.

Interestingly, the phase of the process which divided opinion most evenly was the reference checking phase.  With 47.46% believing that this phase would never be automated, 49.15% believing that either now or within five years this phase will be obsolete or handled by machines. While there was wide agreement that machines could perform the task, or at least make a contribution, there were doubts as to the machine’s ability to differentiate between accurate and inaccurate information.

Matthew Griffin, Futurist and Founder of the 311 Institute, a global futures think tank, noted: “This can already be automated but shouldn't be - information out in the wild can be incomplete and inaccurate so using an AI to automate it would yield lots of false positives”. In this case, the mass of information which is publicly available is seen as an impediment rather than an advantage. Other respondents noted that senior executives are now able to manage their online presence, meaning that AI-based referencing may not capture the offline conversations, which can sometimes be key in this phase of the process.

The research shows that AI will cause significant disruption to the executive search process. Human bias will, in the medium term, slow down this disruption, particularly at the latter stages of the process. However, the commoditisation of data is already changing the candidate identification phase of the process to the extent that executive search firms may soon find that they are going to a client meeting with the long list already created. At mid to junior level where volumes are higher, machines are already taking over to the extent that the race for volume recruiters may be a software, rather than human, race.

At executive level, the sense is that AI and other technological advancements will play an increasing role as legal kinks are ironed out and human decision makers become more comfortable with machine-based recommendations. Importantly, the need for machine intervention is largely due to the inability of humans to reliably predict future behaviour in others. If humans can improve in their assessment and selection techniques, perhaps they can stay ahead of the machines. Industry specialist thought leaders who bring experience knowledge and expertise will thrive and see their work enhanced by AI.

Research and candidate identification is already becoming commoditised, meaning that the executive search consultants’ relevance will be based on the value they bring to the remainder of the process. Executive search firms must continue to work on adding value to their core proposition, while offering additional services around assessment, onboarding, cultural alignment, employee engagement, leadership consulting, board advisory services and executive coaching. 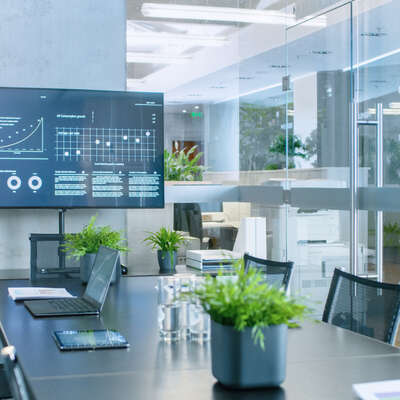 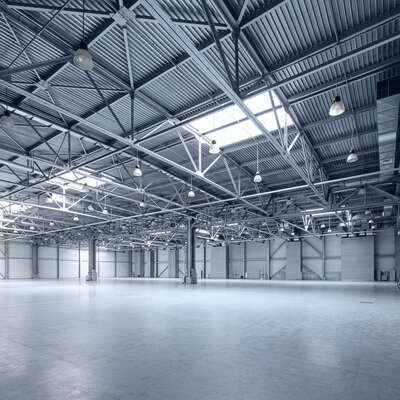 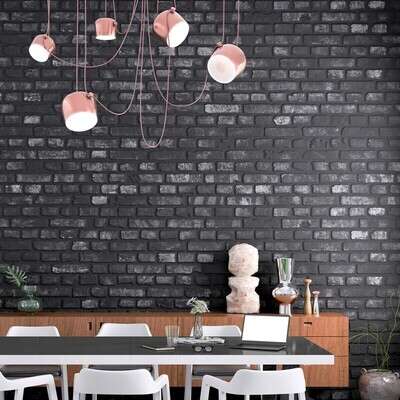