May 5, 2021 - Today, we proudly announce Sara Lindholm Larsson, Change Leader in the Management Team, Region Stockholm and Martin Tegnér, Director of Operations Heart, Vascular and Neuro, Karolinska University Hospital, as the co-recipients of the Crisis Leader of the Year, recognizing their innovation and agility towards protective equipment challenges amidst the COVID19. 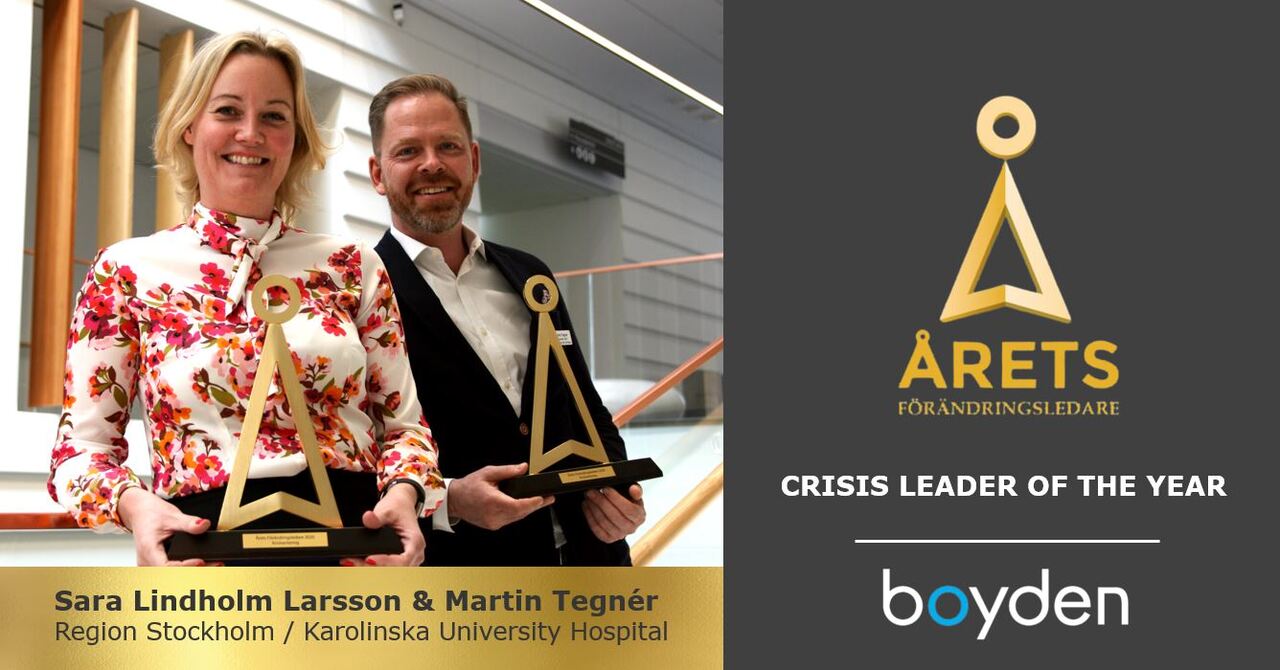 The Awards Jury shares their motivation for this year's celebrated co-recipients:

" In one of the most challenging pandemics in world history, Sara and Martin were in March 2020 commissioned to secure the supply of protective equipment to Karolinska University Hospital, which soon expanded to include the entire region. By setting up a "Command Center" (centralizing competences, information, decisions and control to the same location) and starting collaborations with a number of large companies such as Scania, SAS, Coor, HM, Camfil and IKEA, they managed, despite a global shortage, to secure a sufficient amount of equipment, so that they could also help other regions and cope with the continued challenging situation during the autumn. Sara and Martin had a clearly shared responsibility for the task, both to be able to support each other and to ensure that the assignment would not stand and fall with one person. With a strong focus on the task, they have worked dedicatedly and purposefully and they have engaged both internal and external partners in a joint and truly exceptional effort."

Successful change management is among the most demanding in the business world. Boyden Executive Search and Interim Search, presenters of the awards, are especially honored to celebrate transformational leaders who drive their organizations forward with ambition and vision –  precisely in challenging and disruptive times. Katarina Brixéus and Elise Andström, Managing Partners, Boyden Sweden, and members of the jury, comment, "Today, we proudly congratulate two dedicated leaders in this unique category recognizing agile crisis leadership. It is our honour and privilege to congratulate Sara Lindholm Larsson and Martin Tegnér, leaders who demonstrated resilience and innovation in truly life-saving effortt."

Read our interview with Crisis Leaders of the Year, Sara Lindholm Larsson and Martin Tegnér

The jury analyzes the candidates from three perspectives:

Boyden reveals strong confidence in growth potential among business leaders is not matched by confidence in having the right talent to align to strategy, with different skills needed on the board

News Releases
Katia Pina Takes on Global Role to Connect and Advance Boyden’s Leadership Consulting Capabilities Worldwide
This website uses cookies to ensure you get the best experience on our website.  Learn more